In this area you can enter and manage your events, ensembles, institutions and (dance) venues as well as your contact listing.
The project is part of the Kulturserver partner network. Please carefully enter your personal data here; it is the foundation of our contact with you in case you have questions or there are any problems.

Here are the links to the editorial fields in which entries for institutions/ensembles can be made and the dance maker profile can be managed.
With a click on one of the tools, you leave the page and a new window opens where you can use the respective service.
At the topic information & help, you can receive more information on the functions and software fields listed below.

Become part of the network!

Here you can find information and help for the editorial fields:

Learn how to enter an event, a contact for your institution or ensemble as well as manage your account data including your dance maker listing.

First enter a listing for your institution in the cb-address In addition to business hours and contact information, you can also describe your institution’s or ensemble’s focus.
So that your listing appears in Tanzjahr 2017, please note the keyword “Tanzjahr” in the appropriate field (“profile”) upon entering it.

Your events in the event calendar//

When entering events, you can choose between a simplified entry form (in the user panel at “events”) or a detailed entry (expert mode/cb event).
In both cases, you can use the key word field/keyword to influence whether your event should appear in your event calendar; simply note the keyword “Tanzjahr” in your entry.

Your profile in the “dance maker” field//

The dance maker field is presently under construction.
In order to make or manage a detailed entry, please use the dance-germany.org form until further notice
The visibility of your entry as well as your address information can be managed at “contact data”.

In case of questions or problems, you can reach the Kulturserver editorial team at the mail address redaktion@kulturserver.de.
more

born in September 2001 in Germany in capital Berlin

danced on several stages in Germany and abroad in roles at Nutcracker, Carnival of Animals, Coppelia, Le Corsaire, Snow White and the Seven Dwarfs ...

awarded by German Children and Youth foundation & Fundación Telefónica | International in 2016 and 2017, by ZIS Foundation 2017

honored by president of Council International of Dance / UNESCO
Paris in 2017, at International GrandPrix Kyiv 2018 by United World Cultures Foundation 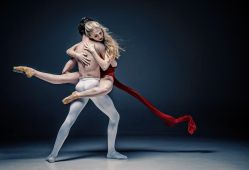